Beavers are smarter than people.... 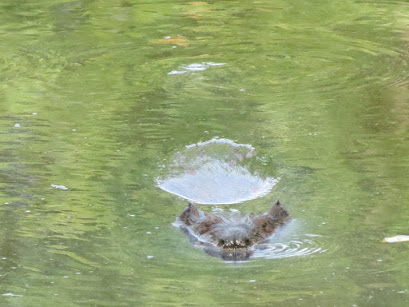 Beavers teach their young how to survive, be a family and how to build a home.  Imagine if every parent had the same instinct and  told and taught their children common courtesy, civility and the word no.

Stand for the flag that flies proudly because of the people that fought and defended it to make this great country. If this country was as bad as some would have you believe, why are so many people trying to come here illegally and legally? Why do you think so many beavers live here?

Stand for the first responders; Police, Fire and EMS who run into situations everyone else with a brain is trying to get out. No one is in those jobs to make money, they are there to serve their community and they are the first to be budget cut, maligned and killed. They are only human and humans make mistakes and some are just damned evil in every profession.

Stand for the essential workers; the Doctors, Nurses, Grocery workers, Truck Drivers and the Waste Service people. They are the front line against the COVID pandemic.

Kneel at the cross because Jesus was given up for your sins. If you kneel for "Social Injustice" and want to defund or eliminate law enforcement you had better look at all the crime stats first. The police are not the problem. The "urban woke culture" is born of bad decisions by leftist leaders and governments giving people what they want and not what they need, self-respect. Self-respect comes with a strong family bond and values, a good education and a good job you can be proud earned by your work, not your gender or race. No one with a sense of morality and self-respect could go out and riot, loot, kill and injure people for the sake of George Floyd. Thousands of criminals tearing down cities, rioting and killing is not righting a wrong.

Bow your head for the moment of silence to pray for the end to all injustice and that all may see that all lives matter. Bowing your head offends no one and prayer is much stronger than rioting.

Shake your head in disbelief at what you see in Oregon, Washing State and D.C., New York City and Chicago. Leftist, marxist, socialist or whatever you call them have run their cities into the ground. People are running from California and New York; so-called bellwether states, because of mismanagement and corruption.

Lastly, to all you parents that love your children, it's ok to say "no". It's ok teach right and wrong, your shrieking child is not going to be scarred forever it they don't get their way. You are their parent, not their friend. You are their first and most important teacher and they must learn winning and losing graciously. Stop giving trophies of participation, stop telling them they were cheated, sometimes someone is better at something than they are. The lesson is to work hard, play nice and respect everyone's opinion even if you don't share it.

Now go outside and have fun.