Anyone seen a Life Guard at Roger’s Rock? 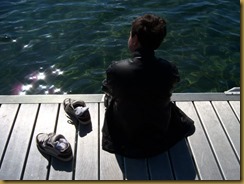 The better half and I have visited Roger’s Rock campsite on Lake George just north of Hague for the last two weekends to throw the boat in and use the beach. Odd thing is no one has seen a life guard since the 4th of July weekend. Imagine this: you spend 22.00 dollars a night to camp or your just paying 10.00 dollars day use. Hey, I know that’s not a huge sum of money but if your vacation or day trip to the jewel of the Adirondacks included being at a beautiful lake with a beach wouldn’t you expect to be able to go in the water?

I spoke with several “frequent flyers” to the  rock and apparently life guards have gone by the way of the carrier pigeon. Extinct. Not that this stops anyone from going into the water but how much does a life guard cost from 9 am to 5 pm? 19.00 dollars an hour according to sites I polled. That’s just under 200.00 dollars a day for two guards doing shifts. From Memorial Day to Labor Day that’s about 110 days that’s about 22,000 dollars. Is the state of NY really think it’s saving money by cutting life guards on upstate campgrounds? How much is a wrongful death suit running these days?

Even worse the people I spoke with said that some party folk set up full bars on the beach in violation of the no alcohol and no glass containers rule. People were loud, drunk and stupid on the beach and the camp staff was non-existent so families just left. If you try to hit the rack for the night quiet hours are not being observed and some of the mouths are pretty filthy. Trying to find camp staff after hours is a snipe hunt.

I’ve been going here over 50 years and this is a beautiful campground. I don’t know if there are budget issues but it’s not being run properly. You want to ruin tourism just let the animals run the zoo. Time to get this fixed. I bet you can find life guards on every beach on Long Island and NY City….