How can scientists and politicians be so egotistical and so wrong.....?

First...If the climate hadn't changed you wouldn't be here. The earth started as a ball of dust that grew, compacted, increased in gravity and was struck billions of times during the early universe.

Second...Once things stabilized a bit and the earth cooled from violent volcanic activity and water pooled the atmosphere was absolutely unbreathable to anything on earth now. Water existed and soon life in it's earliest form occurred and evolved. No human could have existed then either. Hell, we've only been around about 200,000 years because the earth climate CHANGED..

Third... Plate tectonics, vulcanism, global cooling, global warming, solar cooling (yes the sun changes) and eruptions affect the climate. We have never had any control over that. In the life of the earth we are about a 20 minute blip out of eons the planet has been around. The belief that we can "save or kill" the earth is absurd. It's like believing a paramecium can build and pilot a star ship.

In all seriousness, climate will change no matter what. (Sorry Bill Nye and get some help for that Turret's issue) Seas will rise and fall, land masses will move and we will have global warming and global cooling..It's a cycle... New species will be found, some will become extinct and some will adapt. ( Look up the "Pizzly" bear).

The people that peddle this tripe are in a power grab fueled by bad science, social engineering and taking advantage of peoples good nature and caring. Use your heads, not your feelings. 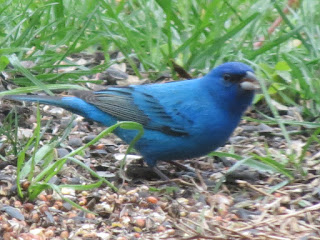 This bird was in my feeder the other day. In 2 million years his descendants will evolve and may not have wings. They may swim or dig in a much warmer or cooler world with different continents due to plate tectonics.. who knows.?